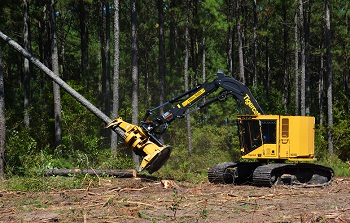 Researchers investigated costs in the plantations of Argentina, Brazil, and Uruguay.

In all three countries, the greatest roundwood demand came from pulp and paper companies. Large pulp and paper companies lead the forest economy and logging contracts in each of these countries. These companies usually drive the technological change and increase mechanization and other changes in logging firms. The contractors were characterised into large companies (> 100,000 tons/month), medium (20,000 to 100,000 tons/month) and small (< 20,000 tons/month). The largest logging firm production levels were in Brazil. In Argentina, no company produced more than 50,000 tons per month, while in Brazil four of 35 companies evaluated exceeded 50,000 tons, and Uruguay only one out of 10.

The felling methods differed across the three countries with feller bunchers being most common in Argentina, roadside processors (excavators with harvester heads) being most common in Brazil, and harvesters in Uruguay. In Uruguay, the harvester-forwarder system has been widely adopted, mostly for clearfelling eucalypts. This system is similar to that used in Scandinavia, where the parent companies of the forest owners in Uruguay are located.

The contractors considered species, operations, contractors and mechanization in their analysis. Total costs per firm were higher in Uruguay than Argentina and Brazil. The average cost per ton was also higher in Uruguay. Factors such as species, type of harvesting operation, and mechanization did not produce significant differences for total cost or cost per ton. Mechanized logging firms did not show cost differences compared with half mechanized, but had significantly larger production outputs. Uruguay had better logging contract prices, but lower profits due to the higher costs. Firms in Uruguay had much less business experience, which results in lower efficiency. The larger logging companies (those which are mechanized or working for pulp and paper companies), are more efficient between 50,000 and 100,000 tons by month. Decreasing costs were encountered with increasing production, being related to the economies of scale, where larger companies spread out their fixed costs more than smaller companies. Small logging contractors who wanted to increase production from 5000 to 10,000 tons per month would have doubled its total monthly cost. Therefore, this is the most difficult stage of growth for logging companies, especially if it is difficult to access capital.

The machine population in Uruguay is much newer than in the other regions due to more recent mechanization, so its capital costs were higher. All the major logging cost components were more expensive in Uruguay, including equipment depreciation, wages, fuel, and administration. Rates would have to increase in Uruguay or high contractor failure could occur. Uruguay also might shift more to grapple-skidder feller-buncher systems if they prove to be cheaper there than the harvester-forwarder systems.

The research was published in the International Journal of Forest Engineering, volume 28 (3) of 2017. The authors are P Mac Donagh, G Botta, T Schlichter and F Cubbage. Source